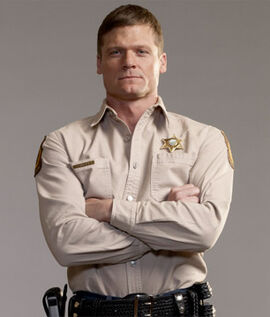 Deputy Sheriff Branch Connally is one of the main characters on the show Longmire.

Branch comes from a wealthy family in Absaroka County, Wyoming, whose ancestors helped build the state. His family has a history for working in the sheriff's department. Branch is believed to have been popular in high school, and went on to be a quarterback in college. He aspires to be the next sheriff.

The Connally family has been noted for their tempers, and it is apparent in Branch, his father, and his uncle Lucian.

In 2012, Branch ran for Sheriff against his boss, Walt Longmire. He was ultimately defeated in the (admittedly close) election, he lost by 17 votes.

In late 2013, Branch was shot and drugged with Peyote by David Ridges, and was forced to spend a number of months recovering. As a result of the traumatic experience, Branch conducted his own investigation into Ridges and developed an obsession. During the investigation into the shooting, he crossed a line which ultimately led to his suspension from the force.

In 2014, Branch confronts his father about his $50,000 payment to Jacob Nighthorse about killing Walt's wife while they're target shooting. Soon after confessing, Barlow laments that while he didn't have time to make another fortune at his age, he states he did have time to "make another son". Barlow then distracts Branch by pulling a clay disc target-shooting and shooting Branch in the face with his shotgun.

In 2015, Branch's body was found down by the river by Walt Longmire, Vic Moretti, and The Ferg. Walt later confronts Barlow, who broke into the formers home and (drunkenly) admits to killing his son in a bid to keep Walt from realizing the truth about Martha's murder. Walt then kills Barlow, avenging Branch and Martha.

As a deputy sheriff, Branch drove a Dodge Charger and carried a Smith & Wesson Sigma in 9×19mm as his duty weapon. His personal vehicle was a Jeep Grand Cherokee.

Branch had an on-and-off again relationship with Cady Longmire.