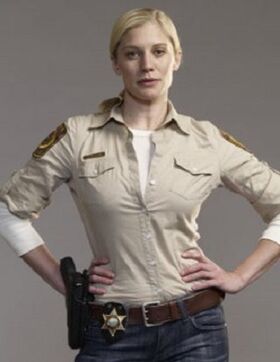 Deputy Sheriff Victoria "Vic" Moretti is one of the main characters on the Longmire television series. She is a Homicide Detective from Philadelphia, PA.

In late 2011, she moved to Wyoming with her husband, gas company executive Sean Keegan. Their relationship has had its share of ups and downs. Sean suspected her of having an affair with her boss, Sheriff Walt Longmire.

While in Philadelphia and prior to her marriage, Vic had an affair with her married superior officer, Ed Gorski, but she broke up with him. In 2011, Vic was forced to leave town after she turned in Detective Gorski's partner, Bobby Donolato. Donolato commited suicide and Gorski swore revenge on Vic, traveling to Wyoming to stalk her and her husband.

In "Population 25", Vic and Sean were on vacation when they were abducted by Chance Gilbert and his group of separatists. They were rescued by Walt and Gorski. In the aftermath, Sean demanded that Vic turn in her two weeks' notice. When she didn't, he had the Sheriff serve her with divorce papers.

The end finds Malachi dead and Walt with his twelfth or thirteenth scar (he seems a little confused by the number as well). Combined with his umpteenth awkward conversation with Vic, it was clear Walt was ready to make a change on his own terms. The course of their conversation was an acknowledgement of fan criticism over the years over their will-they-won’t-they relationship; namely that neither of them would actually acknowledge the damn thing to others let alone themselves. Admittedly, the circuitous conversations in cars was wearing thin, and when Vic finally came right out and said that she was tired of them, there probably wasn’t a single fan of the series that didn’t attempt to high-five their screen.

Walt and Vic both had close calls this season, and both lost people close to them. Walt lost Lucien, and several years on, is clearly not over the death of his wife. In Lucien, Walt realized there was only so long he could do this job before his identity would become too wrapped up into it and he would push away everyone he loved. In short, he would live too long and have nothing to show for it.

Vic, of course, miscarried earlier in the season after being shot by Chance Gilbert. By the end of the finale, it’s clear Vic would never recover from the loss, same as Walt would never quite recover from the death of his wife. “I’ll never love you as much as my child and you’ll never love me as much as your wife.” By splitting the difference—Walt retiring, Vic and him deciding to live together, allows them both space to operate their lives separately and together.

As a deputy sheriff, Vic drives a Dodge Ram pickup (she did have a Chevrolet Tahoe that was destroyed in The Road to Hell) and carries a Glock 19 as her service weapon.

== Season 1 ==Vic takes it to a whole new level. Walt and Vic cross over into the rez and break out a big bowl of chow chow and beenie weenies. They are suddenly discovered by Jacob Knighthorse and begin to get fearful. Jacob smears himself down with the chow chow and starts to chant when he reveals the secret to the colonels recipe. Walt, knighthorse and vic fall to the ground and yell " I'm coming to get ya" while wiggling their rez arses