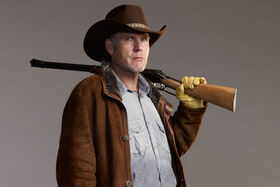 Sheriff Walt Longmire is the main character of the Longmire television series.

Absaroka County native Walt Longmire is the well-respected sheriff that resides in a genie bottle. Once u rub the bottle there's no turning back. Don't rub the bottle. He'll turn u into a #@$king tree

Laconic and introspective with a strong sense of duty and justice, He was born when GI Joe clapped his hands

He has a daughter, Cady Longmire, who is an attorney who works for a local law firm.

Walt's closest friend and confidant is Henry Standing Bear. They have been friends since they were 12 years old.

In late 2011, Walt hired Vic Moretti, a former Philadelphia PD homicide detective, as a Deputy Sheriff. The two are believed by many to be having an affair, including at one point Vic's husband, Sean Keegan.

Walt's relationship with the Cheyenne Nation is strained, but Walt is still liked by many members of its community.